Buzz List| 10 Nigerian Singers Who Have Featured In Movies 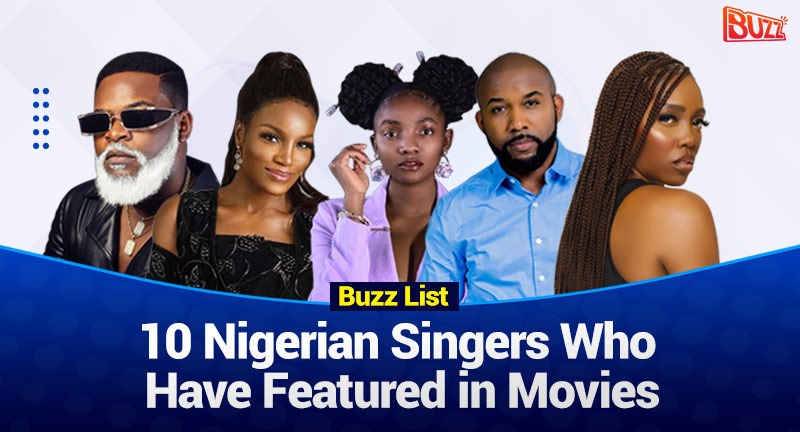 The Nigerian entertainment industry seems to enjoy a synergy across niches from acting, to singing, hosting, et al. Over the years, we have had actors who tried to venture into singing, just as we have had singers who have successfully pulled off movie roles like professionals. In case you didn’t know, we are here to tell you that some of your favourite singers are not only good behind the mic, they have also done well on the silver screen.

The songbird at the cradle of her career shot interesting music videos that matched up with her melodious voice to win all our hearts. If you remember her role in music videos like ‘Soldier’ ‘Jamb Question Remix’, ‘Foreign’, et al., you wouldn’t be surprised when she appeared as the meek and beautiful ‘Simi’ in Kunle Afolayan’s bi-lingual comedy-drama, ‘Mokalik’.

Many of us knew Seyi Shay as the beautiful songstress who came from the UK to take the Nigerian music scene by storm, but we didn’t quite see her as an actress until she appeared in Tosin Coker’s ‘Lara and the Beat’ as the distressed Lara Giwa, the uncaught rich kid with singing talent.

Just as he said in one of his songs, “which musician do you know is having AMVCA?” This question remains very valid because not only has Falz won multiple AMVCAs, he has also won many awards for his songs like the 2019 Headies Album of the Year for his fourth studio album, ‘Moral Instruction. Falz has appeared in a range of movies, from his role as Segun in ‘Jenifa’s Diary to Quam in ‘New Money’ and ‘Quam’s Money’. The truth is that Falz has probably appeared in more movies than any other seasoned Nigerian singer, and he has bodied these roles like he was made for the movies.

Not many people are aware of the fact that sensational singer, Tiwa Savage has appeared in movies a couple of times. Well, some of you might remember her for her role as Sade Banjo in MTV’s ‘Shuga’, but do you know that she also made a cameo appearance in Funke Akindele’s Jenifa’s Diary?

When you hear ‘Makanaki’ don’t mistake him for Teni Makanaki because we are talking about the ‘baddest’ King of Boys villain here. When the rapper was announced as a cast in Kemi Adetiba’s highly anticipated 2018 movie, many people might have wondered what the rapper could do with a role in a movie like that. To many people’s surprise, he not only played the role like it’s his life’s story, but the role also earned him an AMVCA nomination in 2020.

From one of Nigeria’s most eligible bachelor to The Wedding Party, and indeed, the real wedding party. The story of Banky’s acting career somehow influenced the kind of attention his engagement to his sweetheart and eventual wedding enjoyed in 2017. Asides from Wedding Party I & II, the singer also appeared in Up North and Shuga Rush. Let’s not be quick to forget that the singer also made a cameo appearance in The Return of Jenifa in 2011.

The boo of the booless is currently having a good run in African Magic’s ‘Battleground’, a telenovela series where he takes on the role of the hedonistic, albeit intuitive brat, Mayowa Badmus.

Ice Prince made a couple of movie appearances in 2013, but we haven’t quite seen much of him in movies since then. The Jos born rapper made his first movie appearance as Tony in the Ghanian movie, ‘House of Gold’. He also made a guest appearance in MTV’s ‘Shuga’ that same year.

This is another notable singer that has played roles in notable movies. Omawumi officially made her acting debut in 2010 when she featured in the AMAA Award-winning movie, ‘Inale’. She returned to the silver screen in 2013 when she featured in Yvonne Nelson’s movie, ‘House of Gold’.

This songbird made her acting debut in 2014 when she featured in Stanlee Ohikhuare’s ‘Tunnel’ in 2014. The movie which centred around the life and struggles of a young pastor who is trying to find his place in life also featured other stars like Nse Ekpe Etim, Lepacious Bose, Femi Jacobs amongst others.