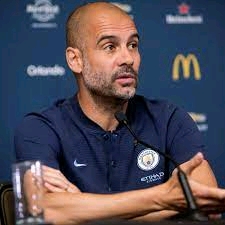 Pep Guardiola has defended Kylian Mbappe’s performance in PSG’s Champions League semi-final first leg defeat to Manchester City and expects the forward to shake off his calf injury to play a key role at the Etihad tonight.

PSG faced criticism after surrendering an early lead to lose 2-1 in last week’s first leg at the Parc des Princes, with Kevin De Bruyne and Riyad Mahrez scoring in the second half after Marquinhos’ 15th-minute header.

Mbappe had found the net in PSG’s previous ties with Bayern Munich and Barcelona but failed to register a single shot in target in the French capital in an uncharacteristically quiet display. There are now serious concerns surrounding the attacker’s fitness after he was forced to sit out PSG’s Ligue 1 victory over Lens due to a niggling calf problem.And while Mbappe was pictured walking with a limp as Mauricio Pochettino’s squad prepared to board their flight for Manchester, Guardiola is confident the World Cup winner will feature.

“He’s going to play and I’m looking forward to him playing,” the City head coach told reporter. “For the football and for the game itself, hopefully he can play.” Guardiola said both Mbappe and Neymar were unfairly criticised and made scapegoats for PSG’s loss in the first leg.